Thanks for visiting my blog. I began journaling about my daily life when I was eleven. Over the years, this has grown to become a way for me to share my thoughts rather than my daily life. I’m pretty open with sharing all the beautiful chaos of life with six children. I have to remind myself to extend grace to myself each and every day! It is my hope that my writings will help others to learn to extend grace to themselves too. After all, if it weren’t for the Grace of God, life would just be messy. I’m so glad that life can instead be a Beautiful Mess and is covered by His Beautiful Grace.

Today was not that great, although it has had some really great moments.  Elijah woke extremely early and started to school around 7:30.  By 8:15, he had completed most of his required work for the day.  He only had to read a book to me and he was finished.  This is great but I really want him to start challenging himself a bit more.  For now he seems to want to finish some things that he has started though and that's a great thing too.  He continued to work on his number roll, reaching 500 today.  This is a Kindergarten Montessori math lesson but when we started using the Math workbook in the middle of the year last year, he didn't finish the math roll.  It has sat in its spot on the math shelf ever since.  He wants to reach 1000 and may decide to continue past that later.  He hasn't decided yet.

For Reading, he has been reading Bob books since last year but when we started using the Reading curriculum this year, the books started sitting on the shelf unused.  He finished Set 2 today and though he can read much more challenging material now, he wants to finish the Bob sets.  He did not do any work from the Blue Language kit today but instead chose to do another section in his Explode the Code book.  He has to do one or the other each day.  We won't move forward until both are completed.

Levi woke much earlier today and went right to work on his Bible verse.  Both boys completed this today and are doing really well with it.  They enjoy learning the verses each week and seeing the improvements of their handwriting.  Levi worked in his Getting Ready for the Code book today and is excited that he is almost finished with this one.  We have one more letter left before we move on.  All of this was completed by about 10 and the day just went downhill from there.  The toddler (I can't put his real name since he is a foster child so from here on out I will refer to him as Prince) began destroying our classroom, Elijah began shouting at everyone and Levi just didn't want to do anything.  We continued to try until 11 when we stopped to clean up to go outside.  11:30 came and their fighting continued, it was nearly time for lunch and the classroom didn't get cleaned up.  Needless to say, we didn't get to go outside, which is what they really needed the most but Prince was far too tired and I needed to get lunch done.  I began lunch at noon and by 12:28 the dog's water bowl had been dumped all over the floor and a gallon of milk had also been spilled, at which point I accidently shut Elijah in the refrigerator and then everyone just started crying.  I started to clean up the milk and told them all to go get in the bed, that we needed naps so that we could get up in a better mood.  They go up the stairs and begin driving a remote control car done the stairs over and over again, laughing the whole time.  I let them be while I finished the floor.  By that time the older two were feeling much better so I let them work in the classroom while I put Prince to sleep.  Before I went upstairs, Elijah was using our numbers and counters lesson to make large numbers. 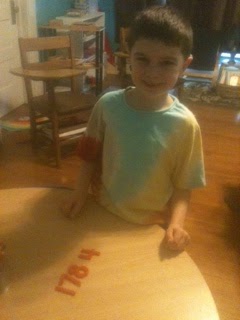 When I came back downstairs, they were working together building with Lincoln Logs.  They had constructed one building, mostly Elijah but he was showing Levi how to do it, and were working on the second.  Levi decided that he wanted me to show him how to do his math lesson so he stopped to let Elijah finish the village that they were building.  Levi has been doing great with his numbers so I gave him our numbers and counters to do today for Math.  I showed him how to lay the numbers out, how to place the counters in a line to the right and then I let him put the numbers in order and put the correct amount of counters beside each one.  He did a great job! 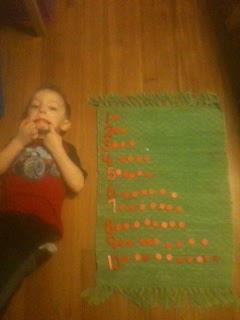 While Levi was working, I showed Elijah how to build with more support after one of his buildings collapsed.  I then left the room to do a few things.  He called me back in to see his village once he had completed it.  You'll see a church on the right, a home in the middle and a shop to the left. 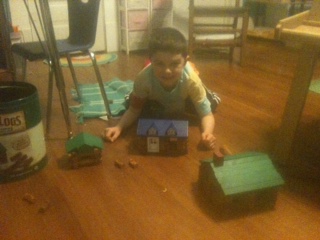 The day was not perfect but it did have some really good moments.  Thursday just seem to always be really rough for us.  After lunch I felt that the day was totally bad but taking some pictures this afternoon and now writing about the day, I am able to see that we actually had a pretty good day.  Yeah, there were intense moments and quite a few things just didn't go my way but the boys learned a few good lessons today.  They are working, maybe not on what I would like but they are working.  They each have their own goals and are working to achieve those.  Elijah wants to finish some things that we have started and Levi wants to finish his required work as quick as possible so that he can do artwork.  He's currently making crosses with construction paper to send to his grandma's for Valentine's Day.  He has found a project in a magazine that he wants to make for his friends next week and Elijah has planned his V-day gift for friends.  We will be posting more on those next week!  Well, tomorrow is Prince's visitation day and our errand day so today is our last day of school for the week.  We've had a pretty good week and I look forward to an even better one next week.  Be sure to check back to see our Valentine's Day projects!!!!!
at February 07, 2013

Email ThisBlogThis!Share to TwitterShare to FacebookShare to Pinterest
Labels: Our Journey